PhotoQuai is a biennial photography exhibition held in Paris. It began in 2007 and I was lucky enough to see the fourth exhibition in October 2013. The exhibition is held on the banks of the Seine between September and November and showcases works from non-European photographers that have never been exhibited in Europe before.

In 2013 the exhibition ran between 17 September and 17 November, with an outstanding array of images from all around the globe. 40 photographers exhibited works that revolved around the human figure. There were landscapes, objects, fashion and architecture – all with a human element.

Images were printed on large displays that were open for anyone to view at any time as the exhibit didn’t close. 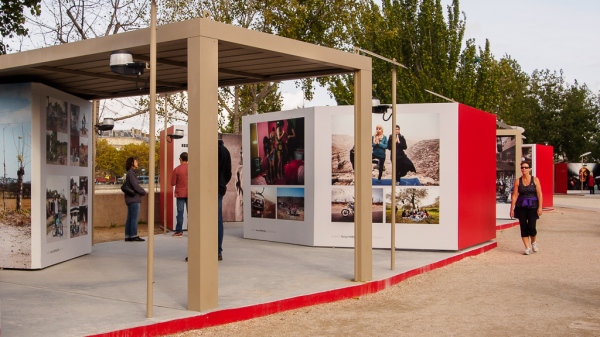 Wandering along the banks of the Seine after a visit to the Eiffel Tower, the PhotoQuai exhibit was a pleasant way to spend an hour or so looking at the differing images.

From people on the beach, to transient workers being transported in the rear of small trucks there were all manner of human interactions. People would stop and stare, maybe in amazement or maybe in disbelief; it was a common occurrence in any event. People would just stop and look for many minutes before moving on to another image. The photographs were engaging on many levels. 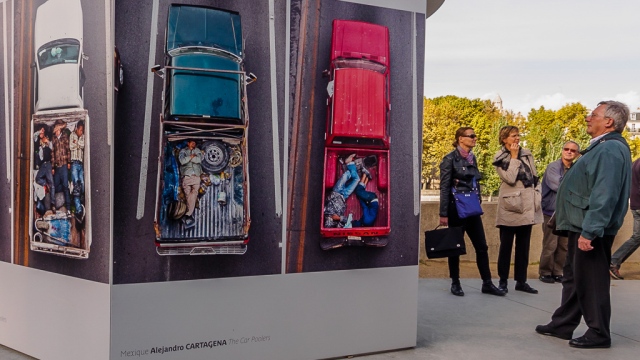 A couple looking at images in the PhotoQuai 2013 Exhibtion

Photography is about vision; I love making photographs that tell a location’s story – the place, the people and the culture. I'm a photographer with a relaxed approach. I'm an experienced traveller and love teaching others about photography. Images can be made anywhere - right in your back yard or in exotic overseas locations. I can teach you not only to look at your surroundings, but also to really "see" what's there. Photography is more than just pressing a button. It's also about vision. Let me show you how to explore your world.
View all posts by Ken →
This entry was posted in Photography, Travel and tagged Exhibition, Paris, Photography, Photoquai, Photoquai 2013, Seine. Bookmark the permalink.