SANTOS Tour Down Under

As the Tour de France has just begun for 2014 I thought I’d share some images from this years SANTOS Tour Down Under (TDU). The TDU takes place in South Australia every January and is the first race on the international UCI World Tour road-cycling calendar. It was the first event added to the UCI World Tour calendar outside of the northern hemisphere and is a world-class event embraced by many South Australians. The Tour winds its way through picturesque locations in and around Adelaide and surrounding regions.

Staging such a major event that is televised all around the world is a huge task. There are many people involved, making sure everything runs as smoothly as possible. Logistics and emergency management are planned down to the most minute details. Every day of the Tour there are hundreds of police out along the route ensuring everything remains safe for spectators, competitors and marshals. South Australia utilises motorcycle police to enforce a “rolling road closure”. Essentially, they ride ahead of the cyclists and direct all traffic they encounter to the side of the road where they’re required to stay until after the Tour competitors and support vehicles have all passed. The system works really well and means less police are required to perform road closures along the route.

Of course it’s not only the police that make the event work. Without the many medical staff the Tour just wouldn’t be able to go ahead. Paramedics also ride motorcycles, which enables them to be highly mobile in case they’re required to make their way through very congested areas. There are also paramedics in fully equipped ambulances as well as numerous doctors in support vehicles and St John Ambulance volunteers spread along the route to help any spectators that may need medical intervention. January is summer in Australia  and it’s not unusual for the SANTOS Tour Down Under to be held in temperatures above 40 degrees Celsius (104 degrees Fahrenheit). The high temperatures take a toll on everyone – competitors and spectators alike.

Paramedics ride motorcycles in the SANTOS Tour Down Under

The ‘Tour Parade’ is a convoy of vehicles that travels about 30 minutes ahead of the race leader. The first vehicle has the Tour’s official mascot, Oppy the Kangaroo, on its roof and the other vehicles each have a large torso mounted to the top of their vehicle representing the Tour Down Under race jerseys – Santos Ochre Leader’s Jersey; Subaru King of the Mountain Jersey; Adam Internet Sprint Jersey; Cycle Instead Young Rider Jersey; Europcar Most Competitive Rider Jersey; and the Hindmarsh Winning Team Jersey.

The vehicles stop at key locations around the race route and hand out promotional gifts and souvenirs to the eagerly waiting spectators. 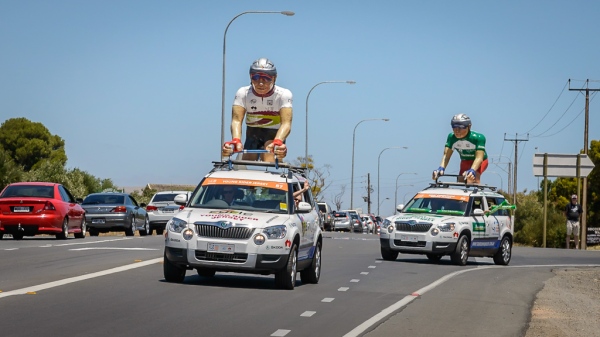 The entire race is televised around the world every day which means that media need to have access to the cyclists too. There are numerous motorcycles with television camera operators and photographers as pillions that follow the race from start to finish. Without them, there would simply be no worldwide following. Many of the camera operators and photographers travel the world as they follow the UCI World Tour calendar from event to event. Watching them twist and contort on the motorcycle to get the best images they possibly can is a sight to behold. Their balance and the skills of their riders is amazing. 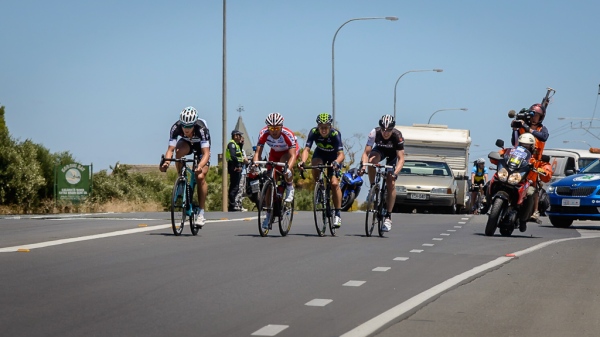 The race moves at a frantic pace and standing on the side of the road as the main peloton races past is exhilarating. They move so quickly they create quite a draft; and the noise is surprisingly loud. The excitement and anticipation builds as they approach then they’re gone in a flash. They really are an elite group of athletes with seemingly limitless energy. If you ever get a chance to witness a professional road-cycling race, I suggest you do.

Photography is about vision; I love making photographs that tell a location’s story – the place, the people and the culture. I'm a photographer with a relaxed approach. I'm an experienced traveller and love teaching others about photography. Images can be made anywhere - right in your back yard or in exotic overseas locations. I can teach you not only to look at your surroundings, but also to really "see" what's there. Photography is more than just pressing a button. It's also about vision. Let me show you how to explore your world.
View all posts by Ken →
This entry was posted in Musings and tagged Photography, Road-Cycling, SANTOS Tour Down Under, TDU, Tour Down Under, UCI World Tour. Bookmark the permalink.