Dogs are people too 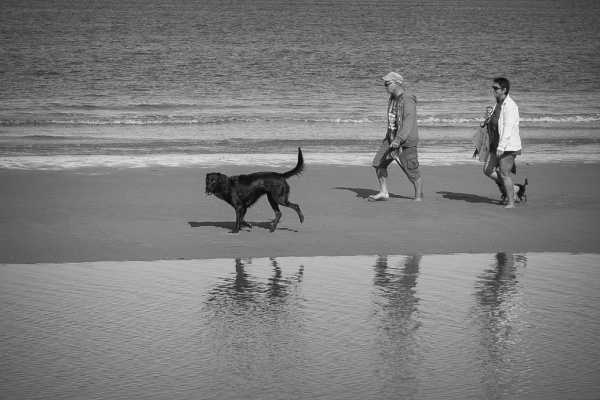 A dog and his family walking along Omaha Beach in Normandy, France

Dogs are people too. There. I said it. I can’t resist making an image of a dog if I see one. There has always been a dog in my family, for as long as I can remember.

Dogs make great people. They love you unconditionally and never hold a grudge. No matter what type of day you’ve had, they’re always there with a wagging tail and a slobbery tongue when you get home. Five minutes, five days, or five weeks – it doesn’t matter how long you’ve been gone they get super excited to greet you when you get back. So, I like to make images of them when I see them.

The image at the top of this post shows a dog and his family walking along Omaha Beach in Normandy, France. I saw them coming and spotted the pool of water that had been left by the receding tide, so I waited for them to get into the right position to capture their reflections as well. There are actually two dogs in the image… can you see the second one?

The next two images were both made in Honfleur in Normandy. I saw the the man sitting on a fence with his dog while I was walking through the old part of town. He was just sitting there talking to his four legged friend, so it made sense to ask for a portrait. I think both boys liked the attention! 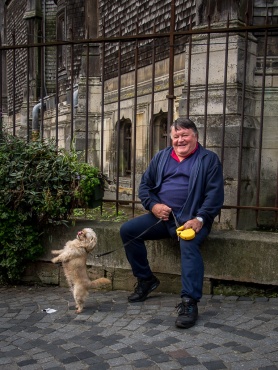 A man and his dog in Honfleur, Normandy, France

A Golden Retriever and his master walking along the street in Honfleur, Normandy, France

I saw the man in the left image below, sitting on the concrete bollard. I asked if I could make his portrait with his dog and he said yes, but seemed quite bewildered about why I would want a photograph of him. He wouldn’t look at the camera while I made the image, but he did smile and agree before I made it. I think he was just a little self-conscious, but I think the image works because both he and his dog are staring off into the distance, both looking in the same direction.

The face in the middle image below was spotted in Bayeux, France. He was sitting waiting with his owner and lapping up ear-rubs like there was no tomorrow. Who could resist that wonderful face? He was a great model and just sat patiently while my friends and I made photographs of him before patting and rubbing his ears as  a thank-you.

The German Shepherd on the right was sitting in front of a café in Paris. I went over and made friends with him before making the photograph. He was such a friendly dog and a wonderful model! I think this breed has a bad reputation, but I don’t think that could be further from the truth. They’re great dogs and very loyal. Of course, like any dog, they can be trained to be nasty, but that’s the owner – not the breed!

A man and his dog staring into the distance in Honfleur, Normandy, France

This Golden Retriever was waiting patiently in Bayeux, France.

This German Shepherd was seen sitting in front of a café in Paris, France

Of course, Europe isn’t the only place with great dogs. The young boy in the image on the left (below) was photographed on Acland Street in St Kilda, Melbourne, Australia. He was out for a family stroll and loved all the attention he was getting.

Finally, the dog on the right is “Russ” who is keeping his master Ian “Rattles” Retallack company as they travel around Australia by horse-drawn wagon while raising money for Cancer research.

This young Staffy was out for a walk with his family on Acland Street, St Kilda, Melbourne, Australia 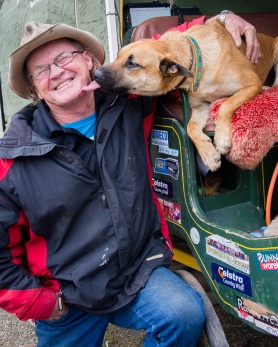 Dogs make great companions. Eager to please, no prejudices and they can always bring a smile to your face.

Photography is about vision; I love making photographs that tell a location’s story – the place, the people and the culture. I'm a photographer with a relaxed approach. I'm an experienced traveller and love teaching others about photography. Images can be made anywhere - right in your back yard or in exotic overseas locations. I can teach you not only to look at your surroundings, but also to really "see" what's there. Photography is more than just pressing a button. It's also about vision. Let me show you how to explore your world.
View all posts by Ken →
This entry was posted in Photography and tagged Acland Street, Australia, Bayeux, Dogs, France, Honfleur, Melbourne, Normandy, Paris, Photography, st kilda. Bookmark the permalink.